Our security solution for flagging and blocking cyber attacks

Cybercriminals are becoming increasingly secretive in their attempts to hide their attacks and slip under the radar of security solutions. The Stormshield IPS-IDS engine gives you a solution for detecting (IDS, Intrusion Detection System) and preventing (IPS, Intrusion Prevention System) the most sophisticated attacks.

IPS and IDS systems monitor network traffic, packets and their contents in real time, and detect abnormal and suspicious activity. All the IDS system has to do is issue an alert, and the IPS system will block the attack. This technology provides protection against attacks based on vulnerabilities in network protocols.

Intrusion Prevention System: how does it work? Placed at the edge of the networks they protect, intrusion prevention systems analyse network packets to check protocol compliance and control over commands. In order to block attempted attacks, they then check whether the network packets contain a set of data matching known malware signatures. 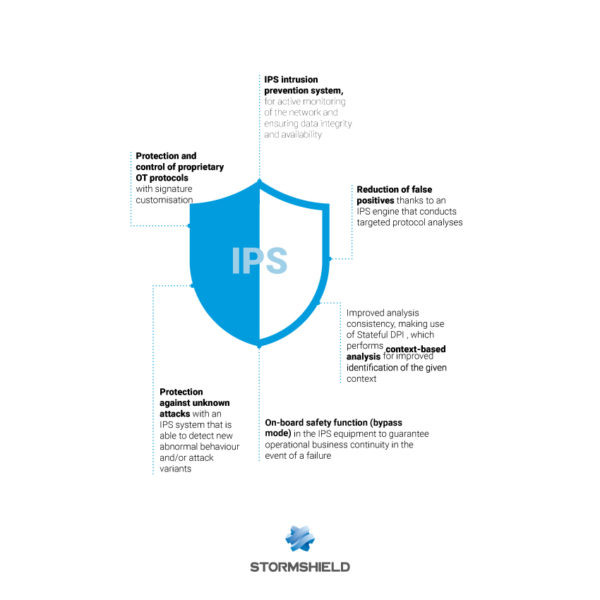 Intrusion Prevention System, how does it work? The answer in pictures. 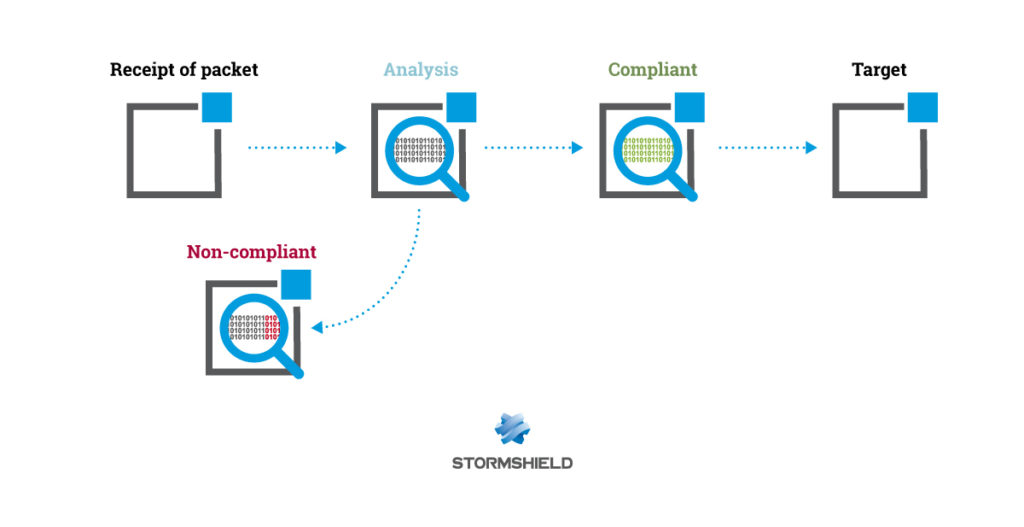 What’s the difference between a firewall, an IPS and an IDS? To protect your network, these security solutions work in complementary ways: the firewall acts on traffic by filtering flows according to predefined access rules to network resources; the IDS raises alerts based on suspicious behaviour; and finally, the IPS blocks cyberattacks.

The Stormshield IPS engine is able to decode the protocols used in communications and provide advanced compliance verification using Deep Packet Inspection (DPI) functionality. This type of IPS solution, known as a “Stateful DPI”, can increase the security level of the operational infrastructure, reducing the extent to which network assets are compromised.

This offers targeted protocol search and signature protection: the Stormshield solution gives you a high-quality intrusion prevention system that ensures the availability and integrity of your systems.

Defence systems in the OT: industrial sensors or IPS? What’s the difference between the two? What benefits does IPS offer? Find the answers to these questions and more in our "Stateful DPI in IoT environments” white paper.

Stormshield's IPS-IDS system is built into our Stormshield Network Security range of firewall solutions. These firewalls are developed to high levels of market certification, both French and European (Common Criteria, ANSSI certification & qualification, NATO Restricted, EU Restricted and El Centro Criptológico Nacional in Spain, etc.); these third-party evaluation processes pay close attention to security solutions’ IPS engines. These security and sovereignty assurances form the basis of the trust that organisations with the most critical security needs have in us: defence organisations or sensitive sectors, local and national government bodies, financial institutions, etc.

Different types of IPS: not to be confused

To explore the first, focusing on endpoint protection, read our white paper ”EDR and HIPS: which approach to take to effectively block sophisticated cyberattacks?”

Stormshield IPS-IDS: questions & answers. Do you have a more technical question about the Stormshield IPS-IDS solution? Would you like a trial version of SNS firewalls? Or a price estimate? If you require any commercial or technical information, please contact our teams.