In early July 2021, several hundred companies fall victim to a ransomware attack. The attack appears to have been carried out via IT management software (VSA) owned by the American company Kaseya. Read more about a major new cyber attack.

Background to the attack

On 2 July, researchers from Huntress Labs discovered a new wave of ransomware on several hundred companies’ systems. The cyber attack was triggered by the exploitation of a flaw in the VSA management software owned by the Kaseya company. The attack was confirmed by the provider in a statement published the same day on its website, with the finger currently being pointed at the REvil cyber-criminal group.

This software, deployed as SaaS, is used to supervise and manage the information systems of tens of thousands of customers worldwide. The exploit theoretically allows cyber-criminals to compromise all reseller Service Providers and their customers; i.e. currently 40 and 1,000 companies respectively, across a total of approximately 1 million environments. Early indications are that at least 60 customers have already fallen victim to encryption, with members of the REvil group demanding a ransom of 70 million dollars for the decryption key.

The initial compromise of the VSA tool appears to have been carried out via a zero-day SQL injection on VSA's front-end Internet servers. These servers are used to update Kaseya's local monitoring agents (Agent Monitor).

The end-client was compromised directly via the Kaseya Agent Monitor tool, which performs the download itself (in the form of a hotfix) directly from the VSA. This agent is run in a space in which antivirus scanning is disabled (as recommended by Kaseya...), making it easy for the malware to execute. It is then distributed throughout the IS, again via the VSA tool.

Technical details on the attack

These different commands serve to disable Windows Defender and use cert.exe to decode the dropper.

Once executed, the AGENT.EXE software loads another executable, MSMPENG.EXE, signed by Microsoft, to perform a side-channel attack by loading the corrupted MSMPENG.DLL.

Obfuscation is achieved via base 64 encoding. But because the malware is downloaded into a directory where the antivirus is not intended to be active, and this is done via an "official" software feed, this obfuscation is not essential.

The ransomware and its means of propagation is of the type usually used by REvil, namely Sodinokibi. The encryption is performed on the same disk sectors as the source documents, making recovery by disk analysis impossible.

Source IPs of the zero-day exploit on the VSA server:

The use of a certificate signed by: PB03 TRANSPORT LTD

Please note that the data flow must be decrypted, using specialised equipment (reverse-proxy, decryption TAP, etc.), before it can be effective.

SES 7.2 requires a specific configuration to block this attack. For this purpose, we have developed a protection package for SES 7.2, which can be downloaded from mystormshield.eu, and includes:

The supplied policy therefore blocks the attack at multiple levels, guaranteeing the prevention of any execution of the ransomware.

The available version of SES Evolution, 2.0.2, requires a specific rule set to block this attack.

In the interests of simpler deployment, we have developed a specific SES Evolution 2.0 protection package that includes the full protection of the SES 7.2 package and adds control over the loading of the malicious DLL, also refining the execution context for the agent.exe process. Like SES 7.2, SES Evolution blocks the attack at multiple levels, reliably preventing the ransomware from running.

With the upcoming version 2.1.0, available in July, the new correlation protection dedicated to detecting the malicious use of the certutil tool will be able to block this type of attack natively. 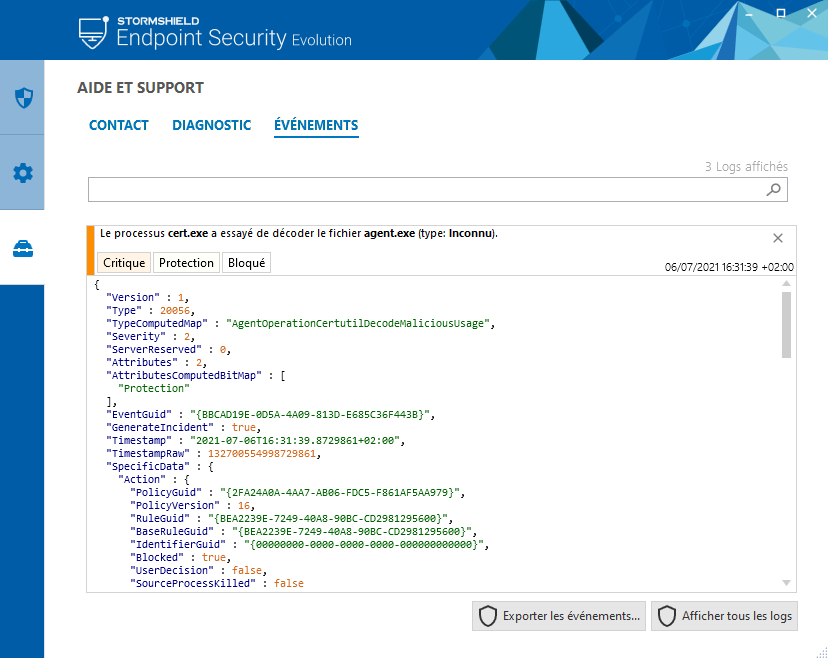 We recommend directly blacklisting the four IP addresses listed as IoCs at the point of entry to your network.

No particular recommendation; note that the upcoming version 2.2 of SES Evolution will incorporate a specific generic ransomware detection engine, in addition to the various existing protections to prevent droppers from working.

[juiz_sps buttons="facebook, twitter, linkedin, mail"]
Do you have a more technical question on the subject? Need more information on Stormshield protection? The Technical Support teams are ready and waiting to help you. Contact them through the incident manager in the MyStormshield private area. To access this area, select the "Technical Support” menu / “Report an incident / Track an incident".
Access MyStormshield