Our security teams noticed a spike in cyberattacks using the Ursnif malware in September. Communications from other cybersecurity players indicate that more than 2,000 Italian companies have been targeted in around 20 campaigns to date. Find here an analysis of the Ursnif dropper and Stormshield protections.

The context of the attack

The origins of this stealer lie in the TA544 group. This cybercriminal actor distributes banking malwares and others in various regions (particularly Germany, Spain and Poland - in addition to Italy). The Ursnif malware is also known as Gozi and aims to steal banking information from targeted computers, such as credit card data. This is not the first time this malware has been in existence since 2007 and has been evolving since then.

In this paper, we provide an analysis of the Ursnif dropper and Stormshield protections against the dropper and the malware payload.

As almost always, this infection starts with a targeted phishing campaign associated with social engineering. The goal is to force victims to download an excel document that contain a loader that will charge and execute the malicious payload.

We will see that in this particular attack, it is mandatory to run an Italian version of Windows, with regional Italian parameters.

The behavior of the maldoc take several steps, the last one being the download of the proper malware payload as a ".dll" file that will steal banking data.

It must be noted that this attack is extremely specific and impossible to execute on non-Italian operating systems, which can be a problem for some sandboxing solution or antivirus. Secondly, the Command & control server used is able to detect what IP is connecting and adapt the answer to it.

B. Opening the document (step 1)

The Excel document shows only one sheet, does not display the grid and does not execute a macro automatically. At first sight, the document shows an invoice with a very low zoom level: 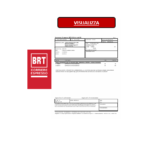 Standard user will not pay attention that cells G122 contains text information written in white over white background, this is the starting point of the maldoc: 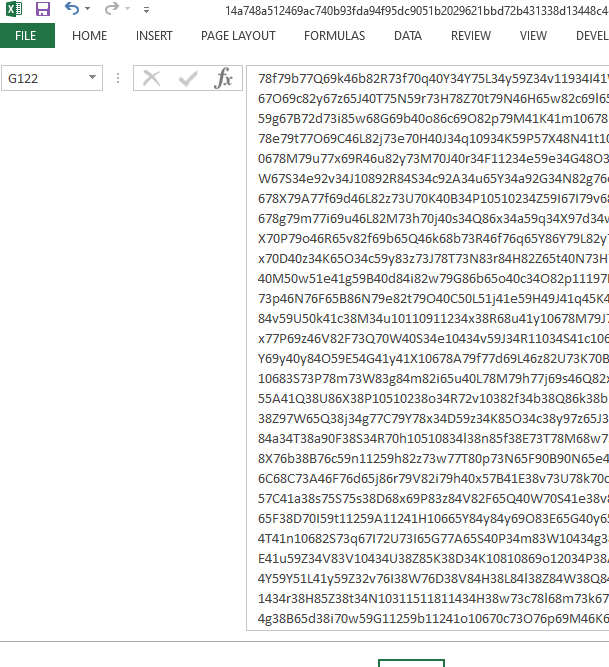 Attackers have crafted the document to prevent macros from being visible: 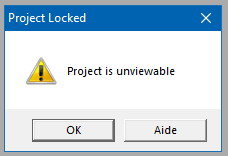 Interesting fact, if the excel file is saved under another name, Excel will simply copy raw data bloc in the new document and keep the corrupted configuration.

The extraction of the compiled macro shows some VBA code obfuscation and also two functions dedicated to decryption of the cell G122:

Other functions are used, like this on which write formula in a cell:

This one will launch the formula execution:

This macro will read the entire G122 cell, decipher it and create a list of formula. 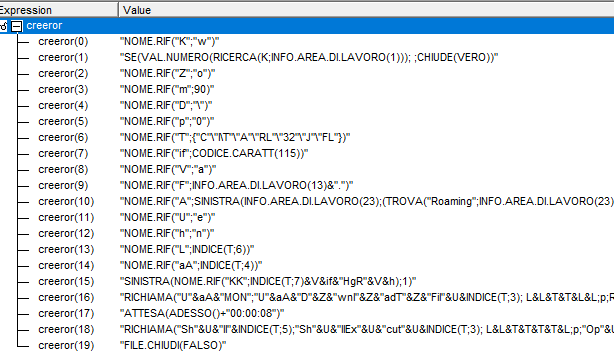 It is interesting to point that excel will use different formula name according to the computer language. That why only the Italian version will work as formula are written in Italian. If not, the malware execution stops here. 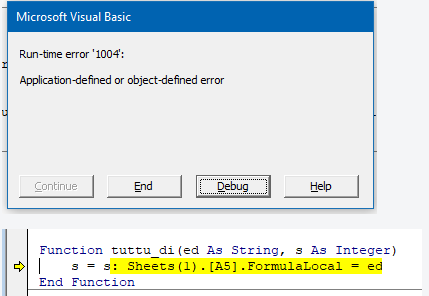 Formula are then executed one by one, data are still obfuscated but we can see some patterns:

Here is the equivalent in English deobfuscated:

The end of the infection is obvious:

At this point, the payload is a Ransomware or a Stealer according to what the attacker wants, and it is launched with Excel writes. The computer’s victim is corrupted.

Means of protections provided by Stormshield

This attack is based on excel and ".dll" file, SNS can protect you from it with its antivirus and sandboxing solution available with the Premium Security Pack licence: Breach Fighter. The first time the file is seen it will be sent to our cloud based platform and identified as dangerous (Suspect):

This attack is based on excel and ".dll" file, SNS can protect you from it with its antivirus and sandboxing solution available with the Premium Security Pack licence: Breach Fighter. The first time the file is seen it will be sent to our cloud based platform and identified as dangerous (Suspect):

For the file analyze to be activated by SNS, the proxy must be activated and a rule of SSL decryption and antivirus inspection must be configured on each flow (http, https, smtp, pop).

Indicator of confidence of Stormshield protection

This paragraph shows how SES reacts on these two files, with default v2.1.x security policy.

1. SES reaction to the maldoc

Regarding the execution of an Excel file, SES let the document open and decrypt all the data by the macro. However, when the formula tries to charge the ".dll" with the "regserv32" process, SES blocks this behavior:

SES Evolution block the dangerous behavior of the maldoc and protect the computer’s victim and the company.

2. SES reaction to the payload

Technically, the chain attack stops before the execution can occurred. But for information purpose, we have launched the malicious ".dll". Here again, SES protects the user:

Action is blocked and a high level of risk is attributed to the host process:

Indicator of confidence of Stormshield protection