Zero-days are back, with a vulnerability in Microsoft's HTML rendering engine. Stormshield Customer Security Lab provides an update on a critical vulnerability.

The context of the attack

Microsoft has published this Tuesday a critical vulnerability allowing remote code execution (CVE-2021-40444, CVSS score 8.8) impacting his internet rendering engine MSHTML, used by many other programs including Internet Explorer. Even if IE has been replaced by Microsoft Edge, it is still present in modern Microsoft operating system, and some programs are still using it, including the Office suite.

Because this Zero-day vulnerability is in the MSTHML module which can be used by any application wanted to show a web page, it can be exploited by a malicious Office document (Excel, Word, Powerpoint) with an embedded web page reference. Some cybercriminal groups are already using this vulnerability to propagate ransomware.

This vulnerability is exploited through web page reference dissimulated into an office document (mostly Word) and propagated using mailing tools. The vulnerability, exploited when the user opens the document, allow the attacker to run arbitrary code remotely (RCE).

To open the document, Microsoft Word must download a remote web page, referenced into the document. Once the document is opened, the web content (a JS code) is downloaded and executed into MSHTML ActiveX component of Microsoft Word. Legitimate behaviour so far. The JS code then downloads the viral package (a ransomware of course) presented as a CAB package which contain a DLL file, a trigger the decompression thanks to an HTML “<object>”. The script then exploits the vulnerability itself by changing the URL of the MSHTML component allowing the uncompressed DLL to be charged into “rundll32.exe”.

The DLL is executed with local privilege and the device is compromised. So far, our teams did not noted privilege escalation during this cyberattack.

The global attack schema is as follow: An attacker sends an email with a corrupted document, and the targeted user opens the document in Microsoft Office. In our example, we assume that Office 2007+ open the document. Here are the details: 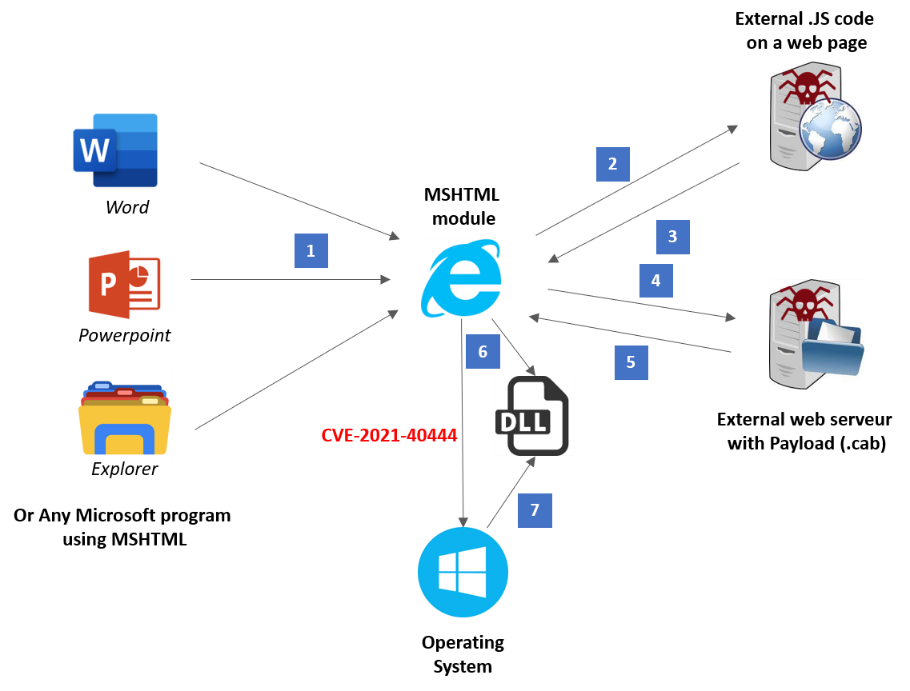 This technic is then used by allow the running ActiveX component to send the following URL:

The result is N attempt to charge the DLL file in random places, whishing one of them will work. Which will inevitably append.

The file “championship.inf” is charged and the machine is corrupted.

Means of protections provided by Stormshield

SNS protection are realized through IPS module with 3 new signatures:

The recommendation below does not concern Stormshield solutions but can be used to prevent exploitation of the vulnerability:

As a curious child, Cyril tried to understand how to use the Motorola 68000 microprocessor directly in machine code. Later, passionate about computer security and "machine-like" developments, he still loves technical challenges. Especially when it comes to manipulating a disassembler or dealing with the latest cyber threats. After a 12-year career in a large French company, he now devotes himself to his favourite activities at Stormshield to propose answers to these threats.